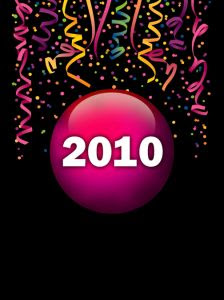 How can I say this politely? Don't let the door hit your ass on the way out!

2010? You're looking great with or without my reading glasses on.

and much more PEACE.

Cheers to all my blog friends!

love, EVI
Posted by east village idiot at 8:54 AM 1 comment:

Merry Christmas to all and to all a good night... 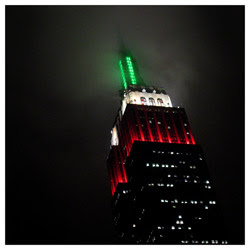 I hope that everyone reading this post has enjoyed a peaceful and relaxing holiday. It's taken me 47 years to figure out how to do it but we've arrived.

We began Christmas Eve at the Christmas pageant at St. Luke's Church - Ben's old school chapel and my church. Was it only four years ago that Ben was one of the "we-three-kings"? It was a crisp night. The streets were wet with the fading signs of snow and drizzle that made the lights of the City glisten even more.

New York is good at making its way through the winter. And fabulous at Christmas.

We then ventured onward from the West Village to Chelsea to the home of my dear friends L and C. Each Christmas Eve, they throw a wonderful gathering for their neighborhood friends that includes the best Tex-Mex food I've ever had. It is so great to be at a party with people of all ages and walks of life. It felt like the City at its best.

After we said our goodbyes, I stepped outside and looked up to see the nearby Empire State Building in all its Christmas glory looking down on me. It felt like the embrace of an old friend. My first Christmas gift -- and it was a beauty.

We got home at midnight and fell fast asleep...even Santa couldn't wake us up.
Posted by east village idiot at 11:56 PM 1 comment:

Christmas in the City 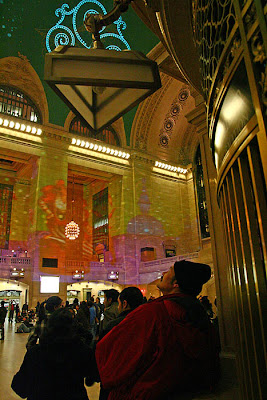 I've been running in and out of the City for the last few days. It is such a comfort to pass through Grand Central Terminal. You can't help but linger at one of the Christmas Fair stalls, small stores or stop by one of the eateries on the bottom floor.

I feel so at home at Grand Central. As a landmark, it holds a special place in the heart of the City. There is so much to explore, so many beautiful details in its design. Everything is bathed in a golden light that can feel quite soothing as your hectic day begins or ends.

During the holidays, music plays across the grand hall of the terminal with a colorful laser show projected across the ceiling. It's corny and festive at the same time.

It's a special place. I love it.
Posted by east village idiot at 9:10 PM 3 comments:

My father-in-law died on September 14th but his funeral and reception were held yesterday at Arlington Cemetery.

Between the elderly World War II vets and active military dying in Iraq and Afghanistan, there are about 30 funerals a day there. After you fill out the paper work they let you know the earliest date available for the service.

It was a beautiful event. My husband and son made eloquent remarks at the service although Ben began choking on his tears half way through. I was very proud of my husband Brian. He spoke with grace and thoughtfulness.

Afterward six gray horses ridden by soldiers pulled the caisson that carried the single coffin to the burial site. Military officers involved in the ceremony march behind with family members following.

They remove the flag and fold it in an elaborate ritual then presented it to my step mother in law. After the twenty one gun salute they play Taps. Some closing prayers were made and the ceremony came to an end.

It was a tough weekend. The house was officially sold two weeks ago and his widow will be moving back to Missouri in a few months to live near her two sons in St. Louis. Not having a place to go back to is hard for Brian and Ben. It feels like his father died and every sign of him was wiped away...at least it feels that way now.
Posted by east village idiot at 5:46 AM 5 comments: