Sometimes I like to look things up in Wikipedia. Don't ask why. You can't trust it as a source.

But there's something about it, particularly the tone of the language and all of the ridiculous links that make me feel like I'm posing the question to the person next to me - - not really looking it up.

Sometimes I laugh at the editorial undertones - especially what is omitted - love that part the best. There's something about half-knowledge that seems very American to me. I'm sure Benjamin Franklin would have agreed. 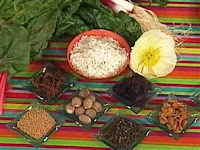 Brian and I celebrated our seventeenth anniversary (gulp) on Saturday, February 10th. It turned out to be one of the best ever. We made reservations earlier in the week for Tabla - a Danny Meyer's restaurant overlooking Madison Park (24th and Madison).

The ambiance was warm and inviting. The food was fabulous. Each dish I had was superb (try the tabla crab cake then move on to the tapioca crusted shrimp and scallops with braised fennel in a coconut curry - mama mia!). We had a split of champagne to start off the meal. Is there anything nicer to drink than champagne? Not for me folks! Dessert was great - I had a cranberry concoction with a little scoop of rosemary sorbet - and naturally Happy Anniversary was beautifully written across the top of the plate.

We asked for the check and the waitperson replied "M__ would like to wish you both a very happy anniversary with his compliments". My brother had called ahead and paid for the whole thing! He didn't want me to know beforehand because he knew I'd end up ordering a glass of water and piece of toast - if I knew he was paying.

That was pretty darn nice. And of course I immediately burst into tears of appreciation - leaving my waiterperson a bit speechless and Brian rolling his eyes at my corny bad-ass self.

We then returned home and got very silly for the rest of the evening...as my perpetually pregnant Italian Catholic mother would say.
Posted by east village idiot at 1:50 PM 9 comments:

After school yesterday, I took Ben to Tompkins Square Park so he could play with his friend before starting his homework.

It was Arctic out. My friend Claude and I did all we could to keep our circulation going while our sons frolicked about the playground as if the first day of spring had arrived.

Now I realize they were in constant motion so their bodies were heating up a bit but what I noticed more is that they were laughing and totally delighted to be playing with each other. Joy, not temperature, was the dominating factor here.

It's been a while since I've been so lost in a happy time that I didn't realize that I was freezing to death. That's life at it's best.
Posted by east village idiot at 5:33 AM 9 comments:

Last night my husband and sister went to see Ennio Morricone, the extraordinary Italian soundtrack composer, perform at Radio City Music Hall. Despite a career that spands over 40 years, last night was Morricone's debut performance in the United States.

How cool for them to be seeing this musical legend during such an historical event!

Ennio Morricone has a singular gift for combining contemporary and classical musical forms into truly unforgettable soundtracks. Even in the spaghetti westerns he worked on, you can hear fine threads of Italian influence in the music.

I LOVE the song Providenza (which I'm sure I'm spelling wrong!). And if you've ever had the pleasure of seeing The Mission (Jeremy Irons/Robert DeNiro), Once Upon a Time in American or Cinema Paradiso (which I also LOVED) and found yourself bursting into tears like I did periodically through each film - - well you can thank Ennio Morricone for ripping your heart out of your chest - kissing it - and returning it safely back where it belongs.

My husband is a musician who writes and performs music beautifully. I'm so happy he had a chance to fuel his soul last night. My sister Elizabeth - - who loves all things Italian and studies the language and culture -- was super nice to invite him as her guest.
Posted by east village idiot at 8:42 PM 5 comments: