If there was no such thing as a state of Monkey Mind, then surely Buddha would have created it upon my birth. The term Monkey Mind refers to a mind that is highly distracted by multiple thoughts, memories, emotions, sounds....

Who am I kidding? I have far more than one monkey in my mind. I wonder what Buddha would think about a Monkey House mind? Would he just shake his head and throw up his hands? Or would he embrace me with infinite compassion? Probably both.

And so I begin my humble first steps into the realm of the lotus blossom. While I am meditating for a few minutes, please keep an eye on our country. We appear to be in the midst of an emerging social revolution. Back to a more balanced people loving society I hope.
Posted by east village idiot at 5:06 PM 2 comments:

I am in Truro. It is peaceful and beautiful out. After all these years, my routine remains the same.

1. Return to a familiar summer home set back in the woods but close to the beach.

2. Promptly forget what day it is.

3. Promptly forget what time it is.

4. Make a list of all the spiritual cleansing rituals I have in mind.

6. Bring a list of all the fun things to do between goofing off and sleeping.

Perhaps the one part of the vacation ritual that continues to spook me is how I feel for the first two days. Without all the daily responsibilities and distractions of urban life, there is no noise or static between me and my feelings.  I find myself face to face with the stress that I function under and it feels like Clorox pumping through my body. It is amazing how out of touch we can become with our true emotional or physical state and then when the tipping point occurs (illness, depression), we're shocked.

I used to laugh at the 70's term "getting in touch with yourself". I'm not laughing so much any more.
Posted by east village idiot at 10:36 PM 5 comments: 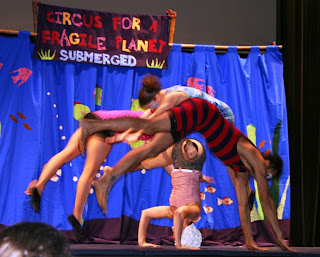 A few weeks ago, Ben, Brian and I were in our old neighborhood and wandered into the NYC Festival of Young Artists and Leaders.  Even the misty drizzle couldn't dampen how wonderful the event was  with a variety of stages spanning East 4th Street from First to Second Avenue.  There were teen rock bands, poetry readings, dance performances and musicians.  There were also lots of tables promoting programs throughout the city for teens interesting in any area of design, visual and performing arts.

I felt sad to be away from this overload of culture. This vibe is a natural setting for Ben. Of course, he and Brian spent a hunk of time at Rivington Guitars which was on the same block as the festival. Ben put his creative talents to work playing a beautiful vintage guitar from what he (and my husband) consider the sacred 1970's. He then attempted to perform the miracle of having my husband buy it.  Sorry Ben -- your TONY award will have to wait.

While I was wandering around I caught a performance by ARTFARM .  They are an incredible theatrical group out of Middletown, Connecticut that combines performance with a commitment to simple living, social justice and environmental sustainability. They performed Circus for a Fragile Planet - and it was masterfully done. I highly encourage people to invite them to your schools or communities. It is well worth it. Their circus set design and music was out of sight. So simple and yet spectacular in its ability to help the actors and circus performers draw in their audience to examine the most pressing environmental issues of the day in a way that is vibrant and creative.

Ben's summer vacation officially started on Thursday.  He has two months of summer fun ahead of him. It will take that long for Brian and I to fully recuperate from seventh grade and to brace ourselves for eighth....
Posted by east village idiot at 8:24 PM 2 comments: 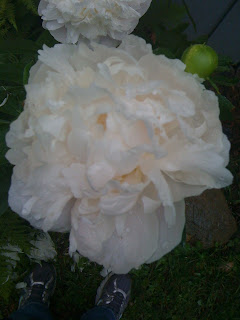 So you might have noticed that my son's adolescence has been holding me hostage for the last several months. Between the overload of hormones and homework, my husband and I shed tears of joy when the school year finally came to an end on Friday.
Could some kind soul please tell me when adolescence ends? Is it 14? 15? (gulp) 16? I don't know if I have the emotional, physical and needless to say, intellectual stamina to make it through three more years of this.
I am all for an integrated curriculum but having my son do an essay, keynote, video montage and POEM on the interdependent relationship between China and the U.S. as seen through an economic lense is pushing it a little too far.
Thank goodness I now have a garden to escape to on the weekends. Pulling weeds, watering and planting is so satisfying after hand to hand combat with a 13 year old son who is three inches taller than I am.
The above photo is a close up of one of the peonies growing in my garden. Make no mistake, I inherited 80% of these flowers from the past property owners. The white and pink peonies are gorgeous. I think they are the sexiest flowers I've ever seen. They are so voluptuous that their stems buckle under the weight of their round multi-layered bloom.  After two weeks or so, they slowly implode and the pedals fall to the ground.

One treasure I share with Ben is driving up to CT on our own to meet his dad at the house. Ben dons his ipod and eventually starts singing in full voice along to music I cannot hear. I love how he feels free enough to sing in front of me in this way. In "real life", he is too shy to sing much. He weaves in and out of a melody, sometimes a bit off tune, lyrics dropped, sometimes the lead singer, sometimes the background. Make a joyful noise unto the Lord....now that's one line in the Bible I agree with.

Ghost in the Graveyard 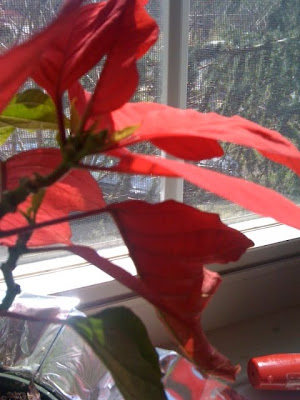 So what really happens to the thousands of poinsettias produced each year for the winter holidays?

I cannot answer that question. My guess is that a nationwide "poinsettia-cide" is practiced in silent conspiracy across this country. And what leads me to this conclusion? Last November, I purchased several poinsettias for my home. Now that I live in a space that is larger than my beloved east village double-wide on stilts, I have hosted several large holiday gatherings. I was counting on the deep red leaves to distract my guests from the fact that I still had the same sparse amount of furniture as I did in my east village double-wide. The plants made it look like a festive waiting room.

As a child of the 60's weaned on plastic, red dye number 2 and MSG, I just figured they would politely drop dead shortly after their brief use. This is not the case. Observe the picture above. Both plants are still going strong on my window sill. There is no way I have the heart to throw them out. Perhaps I should start a shelter for unwanted poinsettias? People could leave them in unmarked baskets at my doorstep. It sure beats buying more furniture.

What's Cookin -  Two weeks ago ,I swore before God and everyone else in the grocery store that I was buying my LAST 16 oz. bag of $7 organic granola. Well, I made good on my promise. The heavens opened up and led me to a recipe for maple granola that is simple and equally delicious as the granola that has been running my family into bankruptcy for the last three years.

...that's what I am these days. It has taken forty eight years and finally, I feel an increasing desire to embrace the practical.

Grappling with my soon to be thirteen year old son may be a factor. January was a tough month. For the first time in B's academic life, he earned a series of poor test/quiz grades in each subject over a three week period. One day a 92, the next day a 62 in the same subject. Teachers do not take kindly to this pattern and wrote "what is going on?" across the top of his work.

My husband and I were confused and concerned. B couldn't explain why this pattern was going on. Why he would study some days and not others. He and I had shouting matches, tears and discussions. It hit me that he is now at an age where I can't control his choices or behavior as I did when he was a boy. We were both having to grow up at the same time.

At one point my son said, "You expect me to do well and usually I do. That is a lot of pressure. When I don't do well - the response is even stronger. I don't get a break." Wow. My head was spinning. He saw his performance as something we were greater stakeholders in than he was. As a mom, it was a reality check for me.

B is at an age where his sense of achievement, structure, creativity and curiosity about the world must more and more become his own. He is the bright, free spirited, compassionate boy I hoped he would be. And I need to let him be that in his own way. And his way may be different from something I imagined.

I also realized that my son grew about two inches in January. He looks and acts like a teenager with just a few traces left of his little boyhood. Those hormonal changes also take a toll on behavior and the ability to concentrate.

Luckily, he was able to turn it around and did well at the end of the quarter. Looks like we all figured something out.

What's Cookin': I have been reading a book on food science and it is totally incredible and overwhelming to me. Wow, so this is what is going on behind the recipe direction's curtain!! How do every day people absorb all of these facts? My head is still spinning about the difference between making cookies with butter vs. shortening - and that is just one grain of sand in the desert that is food science! Will I ever know what the heck I am doing in the kitchen?!
Posted by east village idiot at 7:21 PM 3 comments: