"I miss the way you made the bus smell so good in the morning..." 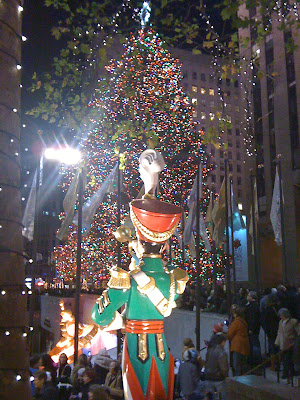 Those were the parting words of M, a dear East Village friend (artist and fellow parent) that I bumped into one afternoon in November back in my old neighborhood.

Brian and I were shuffling up 1st Avenue after running some errands. I wanted some company as I went investigating my old - new looking - neighborhood.

We stood watching a film of the Cream reunion through the window at Kim's Video. Both of us commented on how Eric Clapton and his bandmates had aged...when who should arrive but our friend M. A few minutes laughing together made it crystal clear just how much WE had aged since our youthful days walking down Avenue A in the 1980's.

It was so invigorating to stand there in the street and chat with M. Just to be with someone who shares that old East Village sensibility. He still goes surfing in the early morning hours at Long Beach. Now his son Harry joins him. Summer or winter - he's out there in the waves, greeting the day.

What's cooler than that?

Snapped the above pic at Rockefeller Center en route to a play in midtown. New York is very good at doing Christmas...high camp.

What's cookin: My sister Liz bought me a huge cookbook for Christmas. James Beard's American Cookery. It's pretty interesing. Keep your fingers crossed as I take on a deviled eggs recipe with smoked salmon.
Posted by east village idiot at 10:03 PM 2 comments: