So, where were you on Labor Day? I'll tell you where I was.

First I was here watching the Brooklyn Cyclones beat the Staten Island Yankees.

I MORTIFIED my son by bringing carrot and celery sticks with us...can't help it...it's the Alice Waters in me! He chomped on them discreetly but was almost certain that someone in the park would find me out and make a citizen's arrest. He literally forced me to cover the veggies with my hands for fear of being discovered. 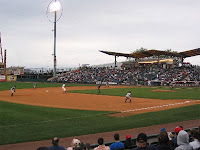 Then I was here with Ben as we watching Brian practicing his own brand of therapy: 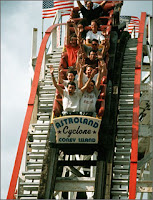 Brian insisted that I have to join him on this plunging colossus for his birthday. I used to LOVE rollercoasters but after a wicked bad middle ear infection followed by a severe case of vertigo, I put rollercoaster rides right up there with pelvic exams. Looks like I'll be saddling up for both this fall!

Glad to hear the Coney Island will be open for the next few years...at least that's what I understand from the news.
Posted by east village idiot at 10:47 PM

out of curiosity, do you bring your own snacks to the movies too?

that would push him over the edge!!

I so feel for Ben. My mother brought healthy snacks with us to the circus. Sigh. Agree with you on the roller coasters. I'd rather watch. Beats feeling dizzy and ill at the end.

I too am a watcher of roller coasters. We have a wooden one at our local fair and the noise it makes is amazing. Very cool.

Good job with the embarrassing. Isn't that what mothers are for?