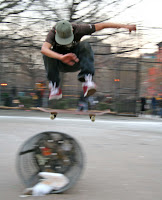 Ben couldn't have had a nicer day. And there was nowhere else I rather be. It felt good - like it was still home.
Posted by east village idiot at 1:51 PM

Many thanks for the compliment and the link! Sometime soon, I would love to get together with you and your family in Tompkins Square Park, and maybe have lunch or dinner afterward.

michael is soo talented and i truly enjoy and appreciate his photos. this is too coincidental as i too was photographing the skaters in Tompkins Square Park this weekend! I got one that I liked, but have to make some color adjustments... i plan to make an east village post in a week or so as i'm moving at the end of the month. i'm so upset about it but there's a bit of a happy ending to go along with it hopefully... stay tuned.

thanks for the photo kudos. i'm not a professional photographer by any means, shape or form, but it is my most practiced hobby and hopefully i am able to pursue it in the future.

how r u feeling?!

The photo is great and I'm glad that you had such a good day. Hope that you all get to go out to dinner. One can never have too many nice people in ones life.