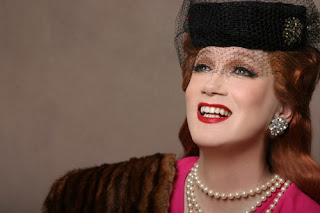 Charles Busch is magical.
If you live in NYC or somewhere nearby, you owe it to yourself to go see Charles Busch perform. I was lucky enough to grab two tickets in December to see his annual holiday show Times Square Angel at Theatre for a New City.  It was so creative, funny, beautiful, authentic...the list goes on. At the end of the show, he came out on stage, wished us all a very happy holiday and sang Have Yourself a Merry Little Christmas. I nearly burst out in tears.
Charles Busch is an actor, playwright, screenwriter, director and drag legend. He is perhaps most familiar to larger audiences as the author of the Broadway play The Tale of the Allergist's Wife.  But for me, he will always be the author and star of Vampire Lesbians of Sodom. I will never forget seeing that play in 1980's with my then girlfriend. Everything about it was so outrageous and well crafted. It left me speechless.  I'd never seen anything like it. My girlfriend didn't get it. Some people get lost in the camp aspect I suppose. But I hesitate to describe Charles Busch as primarily a drag queen. That performance element doesn't dominate my thoughts when I'm watching him on stage.  His work is so much richer than a quick laugh or spectacle.

I am so excited to see his upcoming biblical comedy Juidth of Bethulia that's slated to premiere on March 30th through April at Theater for a New City in the East Village. Go and tell me what you think!