Narragansett Beer - Nectar of the Gawds 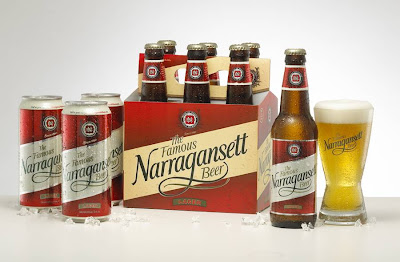 My husband does not lose much sleep over brand loyalty of any kind. For reasons of politics and gender, he cannot be bothered. Unless, of course, you are talking about beer.

Brian's love, loyalty and pure devotion to Narragansett Beer began in his Rhode Island youth in 1970's. It was associated with the Red Sox and Paw Sox. And it was a working man's beer that was highly visible in the Providence area - a city he still holds great affection for.

Naragansett is a local beer with modest distribution and even more modest marketing strategies. It is not available in NYC. When we go to the Cape for the summer, my husband drinks it like mother's milk....only it is much easier to find a nursing mother on the Cape than a bottle of Narragansett.

He was leaving work in Connecticut a few weeks ago and nearly drove off the road when he saw signs of Narragansett beer available at a small package store.

I am sure that my husband was hugging the six pack he purchased like he was cradling the baby Jesus. The proprietor immediately picked up on the spiritual bond and offered to order cases for Brian whenever he wanted.

Brian has experienced so much grief lately. I would like to believe that an angel guided him to that package store and to the beer that reminds him of happier days when the Red Sox were the only thing that could break his heart.

He only left with ONE six-pack? :)

(and that is one smart proprietor;)

D is a beer drinker so this post makes me smile. Hope that Brian is doing well.

A beautiful post, evi, and I'm not even a beer drinker. Funny, nostalgic and charming, then finished off with a poignant close. Sounds like you and Brian were absolutely meant for each other.