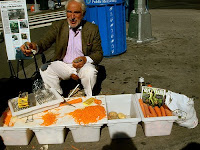 Note from EVI - I frequently passed this fellow at the Greenmarket in Union Square. He finally showed up at Tompkins Square Park Green Market and did his thing - it was like performance art. I bought a peeler immediately and it is all he said it would be!!! Enjoy the following obit from The Villager:

He serves up potato peelers with a slice of style

On any given sunny spring day at the Union Square Greenmarket, a large crowd gathers around Joseph Ades. Known as the “Gentleman Peeler,” Ades wears classic tweed suits and silk ties, sits in a low crouch and demonstrates slicing and peeling potatoes and carrots with an ordinary-looking peeler. In addition to simple peeling and slicing, Ades demonstrates how to use the peeler to make “real, three-sided French fries,” slice carrots in flower shapes so that “your kids will eat their veggies,” and make easy, shredded carrots.

“Right-handed or left-handed — or, like a politician, underhanded — these peelers work,” says Ades, in his British-accented sales pitch. Ades boasts that he is the only person who sells the Swiss-made, stainless-steel tools.

“One for $5 or five for 20 — you can’t get anything else from Switzerland for $5! A Swiss army knife costs $70.”
When I asked for an interview, Ades pointed to a laminated Vanity Fair article.

“Five pages in Vanity Fair — Julia Roberts on the cover and me inside!” Ades told the crowd during his afternoon pitch.

Ades was profiled in the May 2006 “Green issue” of the magazine. The profile describes his habit of drinking Veuve Cliquot Champagne at the Pierre, where he was a regular. When wealthy patrons of the Pierre inquired into Ades’s profession, he said he sold potato peelers. The patrons assumed he was joking until they saw him hawking his signature product on the street.

Ades, 74, came here from England more than 10 years ago. At age 15 in his hometown of Manchester, he learned the art of “grafting,” or selling and demonstrating products. He also learned never to underestimate a small amount of money.

Ades stores his inventory in the maid’s room of his Park Ave. apartment. According to an obituary in The New York Times, artist Estelle Pascoe, Ades’s wife, passed away last fall.

Ades can be found at the northwest corner of Union Square’s north plaza on most Greenmarket days, but he also sells his peelers on various corners around the city. Both New Yorkers and visitors photograph him and post the pictures on blogs as a way to convey an authentic New York experience. He has also been featured on fashion blogs for his dapper outfits.

During his pitch, he often dismisses the idea that his demonstration is simply a trick. “This is not Times Square, this is Union Square,” said Ades. “If this was a scam, I wouldn’t still be here.”

After watching the Gentleman Peeler at work, I decided to buy a peeler myself.

“You convinced me,” I said. “Can I convince you to let me ask you a few questions?”

Ades agreed and told me to come back that evening at 6, but by 5:30, the only trace of him was a stray potato peel on the sidewalk.

He must have been quite a character.

He is exactly the type of person that makes NYC so unique.

He is also the kind of person I would love to sit and chat with for as long as possible.

So sorry to hear of his passing, evi! I'd recently seen him being profiled on some news show. Besides supporting himself in a Park Avenue apartment, he'd sent his kids to great schools--grandkids too, I seem to remember.

His story is a wonderful mix of "there'll always be an England" and the notion that anybody can make a business of anything in New York with enough hard work and style. RIP, Gentleman Peeler.

Was going to say what OHN said. Sounds like he was an interesting guy.

Whoops, that was me above. For some reason only the word verification posted.

Anyhoo, I would have loved to watch him in action. And he looks like he was a snappy dresser!

Who knows where to download XRumer 5.0 Palladium?
Help, please. All recommend this program to effectively advertise on the Internet, this is the best program!