The Kids are Alright 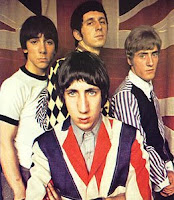 My professional life is keeping me super duper busy these days - - away from the many blog updates I would love to share. So time for a bit of catch up.

Years back when Ben was a little less than two years old, I brought him to a dinner party at the home of some friends in Brooklyn. They all thought him utterly adorable - which he is - and said he looked like a little angel with long auburn curls.

I stared down at my sleeping son, splayed out on their couch with his belly hanging out of his tee shirt, and I responded with total honesty...."Really...a little angel? When I look into my son's eyes I feel certain that he will grow up to be Keith Moon....hopefully a less excessive version."

My friends were shocked and could not understand how I saw that in him.

Fast forward to 2008. My son Ben is ten. He is OBSESSED, OBSESSED,OBSESSED with The Who. My husband brought him to get his haircut at the Israeli barbershop around the corner. Ben opened a rock book pointed to Keith Moon and said "please cut my hair EXACTLY like that!"

Ben wants to be a Mod. He has asked for purple round sunglasses and feels certain that I have the ability to SEW him a British flag jacket (note Pete Townsend above). He had Brian take him to Ben Sherman's in Soho to buy a tee shirt with the Mod target design on it. How did he even know where to find such things?!

He spends countless hours on YouTube playing "air" drums to Who clips.

And of course I will oblige him.

The vendors on St. Mark's Place have the sun glasses and I will order him the Union Jack jacket...all in time for the first day of school where absolutely no one in his class will know what the hell he is talking about...which is just another day in the life of my beautiful, quirky boy.
Posted by east village idiot at 8:18 PM

Your kid is so cool. I am a bit biased as at the age of 11 I too was obsessed with The Who. The docu "The Kids Are Alright" was in my local theatre and my friend's hippy dad took us to see it. I was hooked. I still have all my vinyl from back then. Only when I saw Rocky Horror Picture Show did it surpass my Who Mania. I was a pseudo mod all through high school too. My dad wouldn't let me get a Vespa though. I vow I'll get one some day.

How great at 10 to have his own sense of style and be so sure of himself. He will be so much fun to watch as he grows older.

I love it! My oldest was always a bit bashful but I knew what was brewing inside. I could see it coming a mile away. On his FIRST DAY OF HIGH SCHOOL I was the only one not shocked that he chose to wear a wild tie-dyed shirt to school. Everyone was stunned but I stood back and smiled knowing that my little guy had become what I knew he would. He still beats to his own drummer and is a fabulous kid.

The generations move on. Must I admit that I had to Google this Keith Moon name? Now if he had chosen to emulate Nelson Eddy, I'd have been able to follow. Nelson had a nice haircut, too.

Hi, after a long absence!!

omigosh, ben is the coolest kid--way cooler than my girls who are into the very dorky Jonas Brothers. He must be having a great time as the Who have been all over VH1 lately.

On another note, we missed you at the Pioneer Day party tonight!