Now THIS is New York 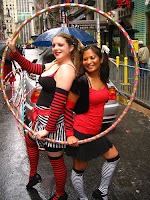 I'm sitting by my front window and there are about 300 people across the street learning how to salsa together in Tompkins Square Park. The instructor is guiding them from one step to the next. To see all these people moving in time with the salsa and instructions echoing across the park is beautiful.

It looks like they are moving into the Rumba! Now I want to take lessons.

I'm on my own this weekend. The boys are up in Boston making a pilgrimage to Fenway Park so I'm flying solo.

As my first act of defiance, I woke up at 8:05 (about 11 am non childrearing time). I walked Saki all over the park and hung out with my friend Martin for a while. He is an artist and a surfer.
I did a few chores then took Saki out to check out the...

UKRANIAN FESTIVAL on East 7th Street afew blocks away. My dad is part Ukranian and spent many years as a child living on or near 7th street.

I dropped my thirsty dog home and went to St. Mark's Place to watch the Dance Parade that began somewhere in Chelsea and shimmied down to Tompkins Square Park. That parade did me a world of good. There must have been a zillion different dance troupes, dance schools, dance groups and a few dancing drunks shaking their groove things for blocks and blocks.

What I LOVED best about it was that the people dancing all had different bodies - sure there were the lean and tall legions but they were way outnumbered by the wiggily, jiggily let it all hang out baby brigade. There were disco dancers, followed by South American traditional dancers. There was a group of black women in black unitards and plumed masks on roller skates doing disco moves. At one point I saw a guy in traditional Greek costume hanging out with a woman who was one of the multitude of bellydancers who showed up. It was just insane, sloppy and great.

They all marched into the park where...they danced some more! At the water fountain of the three graces - three women each wrapped long wide red pieces of cloth around the sculpture and then wrapped themselves in it, moving position very slowly while someone played the violin. It was cool!

After parade watching, I got a slice of pizza and went to the gym....you read that right. Then I wen to Trader Joes and came home and plopped myself down. In two hours I'll be going over to the Pearl Theater on St. Mark's to see the Importance of Being Earnest.

It's a good day in New York.
Posted by east village idiot at 5:55 PM

A glorious post! As a parent, I loved the idea of "sleeping in" until 8:05. I also love that you didn't squander your day alone rearranging closets or scrubbing grout. This post is totally New York. As much as I love living in Chicago, it absolutely fills me with pangs of longing for New York. And it further convinces me that I was kidnapped from there as a baby and raised by wolves in the Midwest.

what a perfect day. i came down st. marks on my bike just as the baracade from the parade was being put away. sorry i missed all that! what a booming day in the east village! nice you had a day to yourself. sadly enough, sleeping till 8 is also sleeping in for me!

Lovely! What a city. I remember one Saturday last summer when I stole some time to find my way to Times Square looking for something one of my kids' friends asked me to send. I happened on this little Peruvian street fair. There were several items I wanted to buy but....they didn't take plastic. Oh, well.

ooh, i'm so jealous you went to the dance parade! we were outta town on Saturday. And I really, really wanted to see the Wilde at the Pearl Theatre, too!

NYC is so much fun and you are so lucky to have so much right outside your door.

As i was reading your post, I thought, this sounds familiar. . . . Then I realized that my sister had told me about the exact same dance festival, which she happened upon after a haircut appointment in the East village. She even took and showed me pictures of the women in black unitards, who seemed to be naked until you looked closely.

Hey EVI...for those of us that are stuck in our humdrum little lives in the midwest while LONGING for some NYC...how about some shots of summer in the city?
(I do think I am going to be making my pilgrimage in early September-fingers crossed!)

That sounds like THE BEST DAY! Seriously. They really don't get much better than that. Right on!

Hope that you are doing well and that life is not continuously stressful.