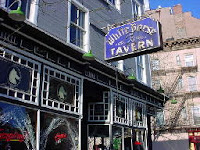 During the weekend Ben takes an art class in Chelsea. Brian drops him off on his scooter and scoops him up afterward for lunch. Each week the ritual is the same. They pull into the White Horse Tavern for burgers and root beer....sometimes Dad's beer has less root in it than Ben's.

This location is famous for being the old stomping ground of Dylan Thomas and other formidable drinkers and writers who passed through Greenwich Village through the years.

I'm sure Brian is drawn to it a bit by the nostalgia but not totally. He's far more invested in being in an old New York bar in the afternoon when it's just the longtime bartenders, a handful of regulars and some routine news or sports show on the small t.v.

Benjamin, at almost ten years old, is a regular.

He's been going there for almost two years now - - usually on a Sunday right after baseball practice. The bartenders greet him with "hey - pitchers and catchers!"

This greeting continues throughout the year well beyond the baseball season and into the School of Visual Arts class season.

Maybe it's just the old East Village in my blood, but I'm happy to know that Brian is indoctrinating Ben into the male rituals of pub life - - the banter, the customs, the food and one day when he is over 21 - - the beer.

It's important to have a true New York bar - a pub-like bar - to call your own. A place you can hang out in the early afternoon and read the Daily News.

A special place you can be with your dad - especially when your dad is your best friend.
Posted by east village idiot at 7:52 PM

you have such a nice family going on there. I'm glad to read this post, because I had assumed that the WHT had been over run by tourists and wasn't worth visiting. Now I really wanna go!

That neighborhood feeling is so hard to find nowadays. I miss it. My husband grew up in a small town and yet he knew more about many areas of B'ham than I did. I mainly stayed in my part of the city. No need to leave.

I've heard that in some bars in Ireland there is a strict pub etiquette. Like when a regular dies there's a waiting period before 'his' bar stool becomes someone elses.

I love the idea of your ten year old being a regular.

Another reason I am drawn to your city. You can be among millions and have your own piece of "famiy" in your neighborhood. Oh, if only I were young, single and rich..nyc would be my home. I have tried to explain it to my kids and haven't figured out how to explain the feeling. I am planning on another pilgrimage in September and I can't wait!

I like that you've decided to stay in such a special place. It's good for a 10 year old to be a regular and know that he is just not another face in the crowd.

What a great way to make traditions and for son and dad to spend time together. Wonderful story.