This Bus Rules My Life! 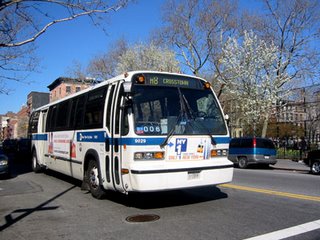 Let's get something clear upfront. I suck at technology. I don't have flickr or whatever the hell people use to put pictures on their blog. It just isn't going to happen in my lifetime.

My husband knows what a luddite he's dealing with and puts pictures up for me whenever I ask/beg/cajole him to. Nice guy, my Brian...and easy on the eyes to boot!

I took this snap. Frankly, I don't think the M8 bus ever looked better - posing there all duded up as it waits to turn onto East Ninth Street.
The M8 takes all of the East Village to work...at least the 9 to 5 type jobs. Writers, artists, self employed, merchants, old people - they get to live up here and leave whenever they want.

The beloved M8 starts on Avenue D and E 10th Street swings down to E9th then crosses the East Village into Greenwich Village into the West Village ultimately turning around at the Westside Highway.

Each block is a lesson in varying degrees of gentrification. I never thought I'd be riding by a KMart everday and yet there it stands in the heart of Astor Place. I'll never forget when it first opened. I was taking a crowded bus back home one evening. As we crossed over Broadway at St. Mark's Place we passed the huge blazing red "K" lit up for the first time. Everyone stopped and stared - as if it was a burning cross. Thankfully a drag queen broke the tension. She stood up and blurted out "Attention KMart Shoppers!!!". We all howled.

The morning bus drivers rarely change so you get to know them pretty well. I suppose that's why I supported the MTA strike. Driving a bus in NYC is friggin' hard work.
Posted by east village idiot at 6:51 PM

It's true, every time I talk to you you're either getting on or off that bus. BTW your love of the MTA shows through the lens, NO bus has ever looked better. I never thought I’d say what a nice photo of a bus!?!

Ditto leelee - that is one flattering shot of a bus.

When I was pregnant with Tacy, I took the bus all the time. I would have rather walked 50 blocks than climb 15 stairs, so I avoided the subway.

It is pretty cool when you get to know the drivers and the passengers. It really feels like carpooling then.

I agree, your words are SO much better than a picture could ever capture.

Being a tech geek takes patience.

florida - what in the world is a gigapixel - it sounds like a water gun?!

leelee - thank you for noticing inappropriately excellen photo of the M8. Obviously I took the shot with my heart and not my head.

mgm - M66 and M31 - now you're talkin' a swanky ride around town. I don't think I ever made enough money to have a reason to be on those routes.

kranki - I LOVE the carpooling analogy. That's exactly how it feels . Thanks for thinking that one up - it will always cross my mind when I board the bus!